Welp, I've set a new record for silence on the blog, and it's mostly thanks to this adorable little demon:

Comet is almost a year old now, and becoming a very good dog, but that's required a LOT of time and training. (He's very high energy, not keen on being alone, and loves to eat things he shouldn't. Good thing he's so cute and loves to cuddle!)

Adolescent puppies certainly keep you humble. Just the other morning, I was out for an off-trail, off-leash walk with him, feeling all smugly self-congratulatory on how well he's responding to his recall command. As I strolled along enjoying the spring sunshine, Comet abruptly dove into a bush. A mother duck flapped out of the spiky foliage, leaving behind a chorus of frantic cheeping.

Me: Oh no, he's found a duck nest! (This has never happened before. Most ducks aren't so dumb as to build their nests in an area frequented by dogs and far from any water.)

I yelled his recall command, but Comet was far, FAR too excited to listen. A horde of ducklings burst out of the bush, waddling at high speed and cheeping at the top of their little lungs. Squeak toys that move!!! Comet could not believe his luck. He bounced around chasing ducklings in an ecstasy of joy, ignoring every treat I offered and tricks I tried to entice him away.

When I gave up and grabbed for him, that only added to the game. He was dodging me, panicked ducklings running everywhere, while I tried not to stomp on them while snatching for my lightning-fast juvenile delinquent. The whole circus went on for a seemingly endless interval before I managed to grab the trailing lead on Comet's harness and drag him away. To my great relief, all the ducklings appeared unharmed--Comet wasn't trying to eat them, just play with them. But obviously we've still got a ways to go before his recall is duckling-proof.

This year hasn't been All Puppy All the Time, even if it sometimes feels like it. In April, my son had his final operation relating to last year's broken arms. The surgeon removed the titanium rods, everything went well, and after another 6-week recovery period, I'm delighted to report the kiddo is fully healed and 100% back to normal. He’s got some impressive scars, but otherwise you’d never know he suffered such an awful injury. Thank goodness for modern medicine, and all the doctors and nurses and physiotherapists who took such good care of him.

After watching what the kiddo went through—and knowing the outcome might not have been so good, were he adult and not so readily able to heal—I was reminded all over again of how precious good health is, and how important it is to enjoy active adventures while I can. I’m in my 40s; hopefully I still have several decades of activity left, but you just never know.

So, I took a break from puppy chasing to hike the Kepler Track with my husband. The Kepler is one of New Zealand's "Great Walks" (which are indeed great!). It’s a 4-day, 3-night tramp through the Fiordland wilderness near Te Anau. The scenery is varied and spectacular, from Lothlorien-style beech forests to rocky alpine views (plus a cool cave to explore!).

Kepler Track trampers stay in Department of Conservation huts with toilets and kitchens and bunks, so not exactly roughing it. I admit I have mixed feelings about NZ's love affair with backcountry huts. The huts are certainly nice in bad weather, and the social aspect is fun. But it's hard on light sleepers like myself--even with earplugs, the snoring can be deafening--and sometimes I miss the solitude and flexibility of tent camping.

That said, we enjoyed the Kepler so much that we decided to do two more of the Great Walk trails as a family this summer. I managed to book spots on NZ’s most famous and popular trip, the Milford Track, and for our second adventure, the Routeburn Track. I did the Routeburn with my husband many years ago on our first ever trip to NZ, long before our son was born, and loved it. We’re looking forward to sharing the experience with our kiddo.

In more local adventures, I made a couple trips to Aoraki Mt. Cook National Park, which is only two hours away and one of my favorite areas of New Zealand. I mean, just look!

We also visited some new spots, like Moeraki on the southeast coast, where bizarrely round boulders lie scattered like marbles on the beach. 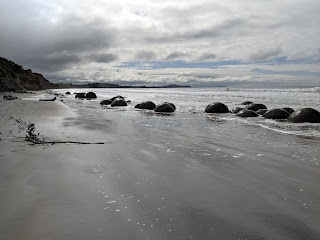 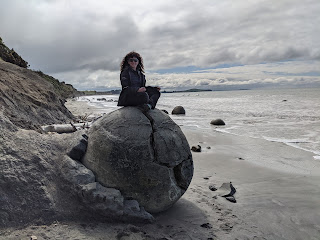 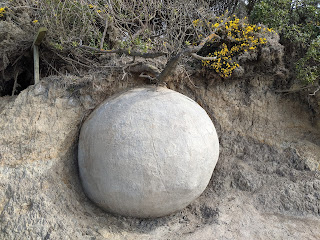 Plus I returned to competitive skating, which was fun but required a lot of special exercises for my aging back to keep it from breaking down. Getting older sucks.

What about writing, you may ask? Yes, I am still working on The White Serpent (the Cara novella) and The Dreaming Sea (the completely new novel). Progress has been slow, but now the puppy is finally learning to chill out while I’m on the computer, I hope my writing pace will increase. Assuming I can tear myself away from the internet, which has become a bit harder since COVID returned to NZ in August.

For those not aware, ever since NZ's original lockdown ended last June, the South Island has been COVID-free and living life without any restrictions or masking or anything. That felt very weird sometimes, looking at scenes from overseas. Like we were living in some alternate reality, compared to everyone else.

Our fortunate existence did come with a cost. All this time, NZ’s borders have remained closed to everyone but returning citizens and permanent residents, who must quarantine for 2 weeks upon arrival. At first everyone was concerned about the economic cost of long-term border closure, as tourism is a big chunk of NZ business. Yet after NZ's original lockdown in March & April last year, the economy rebounded surprisingly well. Kiwis like to travel, and with international travel off limits, instead everyone jumped into campervans and traveled domestically.

We live in an area heavily dependent on tourism, and what we’ve seen is that restaurants and businesses catering to families have done very well. (The ski areas have had some of their highest traffic in years! So much for my dreams of untracked powder, heh.) Higher-end outfits like heli-ski operators are struggling, as are bars who catered to the young single backpacker crowd, but the overall impact is far less than I would have guessed.

Yet quarantine systems are never perfect, and after watching Australia struggle with super contagious Delta, we all knew the risk of a new outbreak in NZ was rising fast. NZ's government was hoping to get everyone vaccinated before Delta could leak into the community, but alas, we didn’t quite make it.

(NZ's rollout of the vaccine has been slower than other countries, because the government waited until one vaccine (Pfizer) made it through the full MedSafe approval process before ordering. This caution wasn’t unwarranted; Australia didn't wait, gambled big on AstraZeneca, and when the news of blood clots came out, their rollout plan hit a huge roadblock. But a wait to order did mean a wait for shipments; large quantities of the vaccine didn't arrive in NZ until mid-year. Border workers went first, then people with health conditions, then everyone else by age groups. The first case of Delta was detected in the community on 17 August 2021, when NZ was about halfway through the age group rollout.)

Happily, the government was prepared. The instant that first Delta case got detected, all of NZ locked down into Level 4, our strictest level. Everything closes except supermarkets and medical facilities, while the government provides financial support so people can afford to stay home. But could even a strict lockdown still work, given Delta's contagiousness? I was far from the only one anxiously refreshing news sites on my phone and watching the daily COVID briefings.

To my huge relief, after two weeks of level 4, the case numbers in Auckland peaked and diminished, and the virus did not spread beyond the North Island. NZ began easing out of lockdown again. At the moment, Auckland is in Level 3 (takeaway food & other contact-less business allowed) and the rest of us are in Level 2, in which everything is open but indoor venues have capacity limits and masks are required inside. Auckland is still getting anywhere from 8 to 40 new cases every day; I suspect Level 3 won't be enough to achieve full elimination again. Assuming L3 is enough to keep the virus from spreading beyond Auckland, I'd guess the rest of us will stay in Level 2 until the population reaches a high vaccination percentage. The plan is to complete vaccination of everyone over 12 by the end of the year, after which point the government intends to stage a slow re-opening of the border. Fingers crossed.

I talked back in January about how hard I found it to have hope for the future of humanity. I still struggle with this. Yet it’s helped me to see NZ pull together as a community throughout this pandemic. It IS possible to have a government that cares about the health and welfare of its citizens, and for the citizens to have faith in the government’s decisions. (One huge help to the trust, IMHO, is clarity in communication. The govt has been excellent about saying, “Here is the current data. Here is what the scientists tell us. Here are the decisions we’ve made based on that scientific advice, and why we have made them. Here is our goal, and here’s the support we’ll provide so together we can reach it.”) 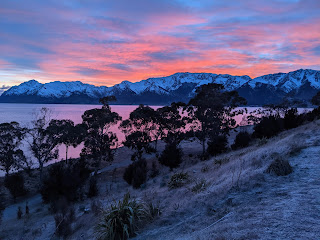 If only climate change could be tackled so easily. Or even entrenched economic issues like runaway housing markets and long-neglected infrastructure. But I am still grateful for the reminder that humans can unite to achieve good things, not just tear each other apart.

Posted by Courtney Schafer at 12:53 PM

Email ThisBlogThis!Share to TwitterShare to FacebookShare to Pinterest
Labels: Life in the time of Coronavirus, News, Puppy Fun, The Dreaming Sea, The White Serpent, Wilderness Pic