So you may remember that near the end of my Kickstarter for The Labyrinth of Flame, I ran a raffle here on the blog to upgrade one backer's reward to the "Ultimate Fan" level, which includes all kinds of goodies - like the choice of a climbing lesson, figure skating lesson, or guided peak ascent. Larry Tipperreiter was the lucky winner of the raffle, and I was delighted to find he was eager to take me up on the climbing! He had plenty of experience hiking, but none with technical rock climbing or peaks above a few thousand feet. I suggested that if he wanted to combine a little climbing with a peak ascent, we could try an old favorite of mine: 14,267-ft Torreys Peak via Kelso Ridge.

By the standard trail, both Torreys and its close neighbor Grays Peak are an excellent, easy introduction to 14er hiking. (You can hike both peaks in a couple hours.)  Scrambling up Kelso Ridge instead of tromping up the standard trail makes the ascent a little more exciting.  Kelso is designated Class 3, which means it requires no rope or technical climbing gear to ascend, but several sections are comparable to climbing a high ladder: handholds and footholds are plentiful, but you really don't want to fall. I thought Kelso could give a fit hiker like Larry a little taste of the more adventurous side of peak climbing, without the need for worrying over ropes and technical gear.

We chose a "weather window," Larry came out to Colorado and did a few acclimatization hikes to help his lungs adjust to the altitude, and then at dawn on a Sunday morning at the end of August, Larry and I and my hiking partner Dustin Putnam started out from the Stevens Gulch trailhead.


14er climbing is not exactly a solitary pursuit; we had plenty of other people with us on the trail, though the crowds thinned a bit once we left the main trail to head for Kelso Ridge.
Some sections of Kelso are fairly easy (if steep) walking, some are fun scrambling, and some are steep, slanted, slippery/slidy dirt (not so fun). There's usually a little routefinding and backtracking, too - it's easy to get off track, especially with all the "climber trails" where people have tried to bypass various obstacles on the ridge. If the difficulty starts getting to the point where a rope would be a good idea, that means you're off route, and the safest thing to do is backtrack and look for another option.


Larry did great, handling both rock and steep dirt with aplomb, and patiently obeying my directions when we needed to backtrack. As we got above 12,000 feet, the altitude started to kick in; most people find themselves gasping for air even on a trail, let alone climbing steep rock, and some suffer headaches and nausea. But Larry had taken care to do a few hikes up to 10,000 in the days before the ascent, which always helps a lot. We took it slow and steady and he never got sick.

The last major obstacle before the summit is a section known as the "Knife Edge" - a very short knife edge compared to the far more exciting one on Capitol Peak, but still, a fun little scramble. Best way across for a newbie is to straddle the rock and inch your way along the knife edge - and if you're afraid of heights, don't look down at the thousand foot drop on the left!

Larry had said that the Knife Edge was the one part of the route he was a little nervous about, but once again, he did awesome! He scrambled right across with no trouble at all.
Hooray for Larry! It takes a real badass to tackle a Class 3 route on his first ascent of a 14er (especially given that he comes from a flatland state!). Not only did he succeed, he still had enough energy left to trek over to 14,278-ft Grays Peak and bag a second summit. We really lucked out with the weather - though it took us 5 hours to do Kelso Ridge, no thunderstorms were in sight when we topped out. So we had plenty of time left in the day to mosey on over to Grays, enjoying the views all the way.


Then comes the long hike down...but it doesn't feel so long when you've got great company on the way! Had a great discussion about books, and conventions, and all kinds of things. (Downhill is social time in the mountains. It's a lot easier to hold a conversation when nobody is panting for breath.)
A terrific day in the mountains! I hope Larry enjoyed his introduction to 14er climbing as much I did giving it. I'm looking forward to taking another backer up Uncompahgre in the San Juan Mountains in the near future - cross your fingers for good weather, and hopefully I can bring back a bunch more beautiful pics.
Posted by Courtney Schafer at 9:12 AM 7 comments:

Last call for Labyrinth of Flame pre-orders (the book is in copy edits!) 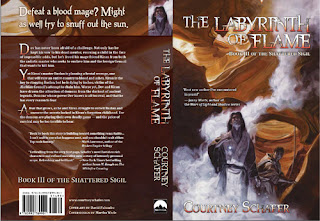 So yesterday I sent The Labyrinth of Flame to the copy editor, after spending the last few weeks entering all the line edit fixes and rewriting some scenes. (Which I did in between day job deadlines, a family trip to Moab, presenting a workshop at the RMFW Colorado Gold writing conference, and taking the winner of my Ultimate Fan reward raffle up two 14K peaks. That ascent was awesome, by the way. I'll be sharing tons of pics this Thursday.)

Going to copy edits means The Labyrinth of Flame is almost done. ALMOST. Hopefully just typos and other small errors left to fix. (Oh, how I hope!) I can't quite believe the story is really all there on the page. I've been working on this book for so long it's hard to imagine not working on it! But that day is coming soon. As is the day when all you lovely patient people will at last have the chance to read it. (The closer that day comes, the more my excitement grows...and yes, so do my nerves! I love this book so much. I know it's statistically impossible for everyone to love it. But I hope a whole lot of you do.)

I've been letting people who missed the Kickstarter do "late pledges" for either ebooks or signed trade paperbacks, but now the book is so close to production, I'm going to have to cut those off. Deadline for pre-orders/late pledges is this Friday, September 18th. After that point, anyone who'd like the book will have to wait for the general release at online retailers, which will happen after I ship all the Kickstarter rewards.

And now, I'm going to collapse. (Sleep has not been a priority the last month or so. Or actually, the last six years.)

Posted by Courtney Schafer at 4:11 AM 3 comments: