Cool audio news, and a return to the Night Bazaar

Good news about the release of The Whitefire Crossing and The Tainted City as audiobooks - they're both coming quite soon!  The Tainted City is scheduled to release via Audible on Oct 2, the same date as its release in print and e-book; and The Whitefire Crossing will release within the next month or two (exact date TBD).  Yesterday I spent two hours on Skype talking with Andy Caploe, who'll be narrating both books.  We discussed character traits and went over pronunciations of names/places/etc - heh, which meant in some cases I had to actually decide on pronunciations.  I'm a visual reader/writer, not an aural one, so sometimes I find myself ambivalent over one pronunciation vs. another for a minor character's name, or a city that's mentioned in passing.  Also, you know that "cast your own novel as a movie" game that some authors like to play?  Turns out there's a good use for it - audio narrators love to know that kind of stuff.  (Sadly, I'd never cast my characters in my head, so I wasn't able to help Andy out in that way.)

Anyway, Andy plans to start recording Whitefire this Wednesday.  I can't wait to hear his narration - I think he'll do a terrific job!  (Andy has done several of David Brin's novels for Audible, and is finishing up recording Sharon Lee & Steve Miller's Liaden books before he tackles Whitefire, so he's no stranger to SFF.)

In other cool audio news, the German audio rights to the books also sold, so at some point I'll get to practice my German by listening to my own novel.  A thought to which my only response is a Keanu Reeves-style "Whoa."

And last but not least, today marks my return to The Night Bazaar, the group author blog I organized last year with a bunch of other debut authors.  (Night Shade took over the blog in 2012 and it's been going strong all this year, with a new group of folks posting each publication season.  Since The Tainted City's releasing in October, I'm joining in for the fall season (Aug-Nov) - I'll be posting there every Monday, so come stop by and say hello!


Posted by Courtney Schafer at 4:47 AM No comments:

Email ThisBlogThis!Share to TwitterShare to FacebookShare to Pinterest
Labels: audiobooks, The Tainted City, The Whitefire Crossing

The Tainted City is on its way...

To press!  That's right, The Tainted City is finished.  For real.  Revised, copy-edited, vetted, and out of my hands, coming soon to yours.  I feel like this:


In other words, I'm more than a little nervous!  As we've all been talking about over at Authorpalooza, the second novel feels far more like a test of authorial skill than the first.  I like the book, but will anyone else?  I will soon find out!

It also feels weird yet wonderfully freeing to no longer be on deadline.  (There are 3 books in the Shattered Sigil series, but while Night Shade has an option on the 3rd, it's not yet contracted.)  For two years now, I've had this little voice in my head muttering whenever I had a spare second: you need to be writing! Your deadline is coming! You have so little spare time you can't afford to waste a second of it!  But now...ahhhhh.  No more niggling voices!  I can read and hike and hang out with friends, guilt-free.  That said, I'll soon be starting the as-yet-unnamed-and-uncontracted book 3, because I'm still head-over-heels in love with my characters and story.  (I intend to write the novel no matter what; I'll put it out myself if necessary.)  But before I plunge ahead, I'll take a nice little breather and let the well of creativity fill back up to the brim.

And in the meantime, if you'd like a signed advance copy of The Tainted City, you've got two chances to win one!

Read the 1st chapter of The Tainted City! And ask me anything on Reddit 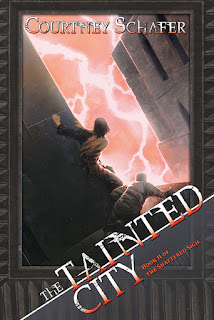 So today is my turn over at Staffer's Book Review's Authorpalooza!


First up, I've got a guest post talking about writing The Tainted City: specifically, 3 lessons I learned that helped me hold on to the joy of writing while I was under deadline.


Tonight at 7pm CST, all 10 of us participating in Authorpalooza will be answering questions on absolutely anything you care to ask!  (So bring on those figure skating and mountaineering questions, haha!)  You can enter your questions in advance, and then we'll be answering them "live" starting at 7pm.  So please, head on over to Reddit and ask away!


The first chapter of The Tainted City is now available to read over at Staffer's Book Review!  I hope you enjoy it - please do comment and let me know what you think.


And, last but not least: win signed copies of The Whitefire Crossing and The Tainted City!  Details are at the bottom of Tainted City's first chapter at Staffer's Book Review.
Posted by Courtney Schafer at 4:10 AM 3 comments:

State of the City, and Debut Authorpalooza

Look what I was reading today: 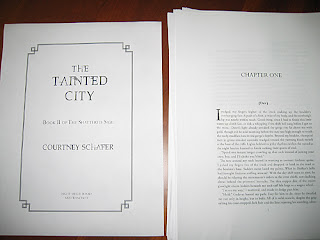 Pre-copyedit galleys of The Tainted City: that's right, the book is almost done!  (Holy crap, I can hardly believe it.)  I'm doing final fixes, then I'll review copyedits, and once all corrections are entered the book goes to the printer.

And to celebrate finishing the infamous second novel (a.k.a. The Book That Ate My Life), I'm joining 9 other  recent debut fantasy authors (Teresa Frohock, Mark Lawrence, Mazarkis Williams, Kameron Hurley, Stina Leicht, Elspeth Cooper, Anne Lyle, Doug Hulick, and Brad Beaulieu) over at Staffer's Book Review during the next two weeks for "Debut Authorpalooza."  We'll talk about what it was like to write our second novels, give away books, and provide exclusive sneak peek excerpts.  We'll also be doing a group "Ask Me Anything" over on Reddit on July 19th at 7pm CDT - see here for details, and come ask us questions.  (On anything under the sun!)
Posted by Courtney Schafer at 12:28 PM 3 comments: