We made it! All the way to Lake Hawea, New Zealand. Every bit of effort and stress and bureaucratic hoops involved in getting here feels 100% worth it looking at views like this:


We didn't head to Hawea right away upon arriving in NZ. First we spent a little over a week in Christchurch, during which we opened bank accounts, bought a used car, switched over cell phones, and tried to handle all the minutiae of setting up a temporary new life in another country. This process wasn't always easy, so I thought I'd share some of the lessons we learned:

1. Friends are worth more than gold

Okay, likely you know this already. Yet I can't emphasize enough what a difference it made to have a friend hosting us during our "landing week" in Christchurch. My eternal gratitude goes to New Zealand author Helen Lowe, who opened her home to the three of us, patiently drove us around town and provided all manner of helpful advice, plus organized a fun get-together with local SFF writers and fed us many wonderful home-cooked meals. (Helen is not only an excellent writer but a terrific cook. Speaking of her writing, if you like epic fantasy and you haven't read her Wall of Night series, you really, really should. I've talked before here about why I love the books, and the series remains one of my favorite currently-running sagas. While we were staying with Helen, I felt tremendously glad for her help and yet regretful that we were taking her away from working on the next installment. I'm so eager to read what happens that I'd hate to be the cause for even the smallest of delays!)

2. Changing a Verizon phone over is NOT as easy as swapping a sim card

I must have read a hundred times in travel articles that switching your phone over to a local provider is as easy as putting in a new sim card.

HA HA HA no. Or at least, not with a Verizon phone. I dutifully made sure before leaving the US that my Samsung S5 was not "locked" by Verizon (i.e. that the phone would accept a new sim card). So when we got to Christchurch, we compared plans from NZ providers, selected one, and bought new sim cards. My husband also got a new phone, since his was pretty old and he'd never liked it anyway. His setup went fine. Mine did not.

Turns out you not only have to swap the sim, you have to dig deep into your phone's settings and change the preferred network type and enter a bunch of new APN info and make all kinds of other adjustments, all of which I had to figure out myself with the help of a lot of google searching. Even after all that, my phone still spits out constant warnings that I'm not using a Verizon sim card and keeps trying to reset back to its old settings. It's so annoying that I'm teetering on the edge of breaking down and buying a new phone.

3. Food in New Zealand is expensive, but the treats are very tasty.

I'd braced for the high food costs before arriving, but still, it's a bit of a sticker shock when lunch in a mall food court costs $50 NZD for 2 adults and a kid. (Burgers + fries + drinks + one ice cream.) We'll be cutting way, waaaaaaay back on eating out, and budgeting our grocery shopping very carefully. This is pretty darn hard when so many tasty treats are on offer. Everything from butter chicken pies to cheese scones to tuna-salad-and-cucumber sushi rolls (why can't you find tuna salad sushi in US stores?). Don't get me started on the actual desserts. As a fan of caramel and white chocolate, the shelves hold far too many temptations like this: 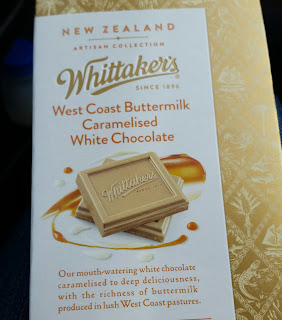 4. New Zealanders are a laid-back crew, but bureaucracy is taken seriously

Individually speaking, New Zealanders seem pretty laissez-faire when it comes to matters of payment. When I arranged to rent a house in the town of Lake Hawea, I was startled when I asked how much the owner would need for a deposit, and she told me there was no need for a deposit or signed paperwork, we'd just work out payment once we moved in. We've had similar experiences with other services (like firewood delivery). "Oh, just send me the money when you have a chance." (Payments here are made by bank account transfer, not checks.) People seem a lot more trusting of each other, which is a refreshing change.

Yet when you encounter bureaucracy, it can be quite rigid. For instance, when we went to open our bank account, the bank required proof of an address (either in the US or here), and the proof had to be a bank statement or utility bill. I dutifully handed over a copy of our joint account statement showing our names and Colorado address. But in Colorado we do all our banking at a credit union, and apparently credit union statements aren't accepted, only BANK statements. What about a mortgage statement? Nope. 401K? Nope. Our utility bills are almost all in my name with my husband as a secondary, which means his name often doesn't show on the statement. I was beginning to panic over how in the world I could provide proof, until I managed to dig up a City of Boulder water bill that showed both of our names along with our address. Whew!

5. The playgrounds are as awesome as the scenery

Even tiny towns can have some pretty nifty play structures. My husband theorizes this is because NZ, much like his home country of Australia, doesn't have a lot of personal injury lawyers. Our son's favorite playground so far is the Margaret Mahy playground in Christchurch (first suggested to us by the ever-awesome Helen Lowe). The park features trampolines, rope structures, massive slides and seesaws, a zipline, and an extensive "water engineering" play area.

In the US, water features are often turned off in winter. Not so here. (I suppose because it doesn't get cold enough for the pipes to freeze solid?) In the dead of winter, with temps hovering not far above freezing, kids were still happily playing with water features. Many of the kids wore shorts. Some of them were barefoot. I thought as a Coloradan used to blizzards and freezing windchills that I was tough, but clearly I have a ways to go to match a Kiwi.

6. Buying a car: timing is everything

When buying a used car, negotiate first on price before you get an inspection done. (We did this the wrong way around. Oops.) Also, don't expect to get anything car-related done on a weekend. Dealerships may be open, but registration offices, mechanics, and parts stores are usually not. We finally finished negotiating to buy a car on a Friday. We'd planned to leave Christchurch the next day. But we couldn't leave, because the car was an import and had to be registered, which couldn't happen until Monday. Thankfully Helen and her partner Andrew were kind enough to let us extend our stay with them at the last minute (this, after already imposing on them for a whole week).

7. Snow chains aren't just a quaint memory from the past

When I first moved to Colorado, I remember marching into a tire store and asking to buy chains. The guy at the counter looked at me like I was crazy. "Chains? You don't need those. We don't even sell them. If a road gets so bad you'd need chains on a passenger car, the state closes it."

He was right. In twenty two years of driving mountain roads in Colorado in winter, I never used or needed chains, even in near-blizzard conditions. Colorado's famously dry & fluffy powder packs down into a surface that provides decent traction; ice, especially black ice, is relatively rare. Plus, an army of snowplows crawls over the highways 24/7, plowing and sanding and dumping antifreeze. All you need is a decent amount of tread on your tires, and you're set, especially if you have a Subaru.

Not so in NZ! Driving the passes in winter, you're required to carry chains, even if your car is an Outback or even some huge honking 4WD off-road monster. And you may well have to use the chains. NZ snow tends toward the icy variety, and their plows may only work the road once a day (often first thing in the morning).

Also, some of the ski field roads (such as the road to Treble Cone) are crazy steep with no asphalt, no guardrails, no room to pass, and a hell of a long drop off the edge.

So for the first time in my life, I own a set of chains. Haven't had to use them yet, but at least we're ready.

8. There's an art to tending a woodburning stove (we're still learning it!)

Most NZ houses don't have central gas-furnace-based heating. You keep warm in winter the old-school way, by burning wood in a cast-iron stove. In Christchurch, Helen instructed us in the art of lighting a fire in the woodburner (use newspaper, paraffin fire starter, and kindling) as well as other tips and tricks (you can clean the glass of the door by spitting on a paper towel, getting some ash on it, and scrubbing). The part we're still learning is how to manage wood and damper (the sliding control on the vent to the outside) such that we stay warm without burning through our entire firewood supply too quickly.

I admit I'm a little ambivalent about the woodburning thing. It's kinda nice to have a fire on chilly winter nights. Yet the smoke haze from whole neighborhoods of houses burning wood is quite noticeable already in mountain valleys. As NZ's population grows ever larger, I have to wonder if the pollution will get to smog-awful levels. (Helen told us that Christchurch has quite strict rules about types of stoves and how to use them, in an effort to combat the pollution issue. Out here in the Wanaka area, I don't think they have such regulations yet, but looks to me like they'll need them soon.)

When we drove from Christchurch to Lake Hawea, we had a choice of routes. The shortest goes through Tekapo near Mt. Cook (NZ's highest peak), and over Lindis Pass, and is said to be gorgeously scenic. However, wintry weather was forecast for our traveling days, and we didn't want to risk the pass and roads being closed, which happens often in snowy weather.

So instead, we took the "Pig Root", driving down the coast to Palmerston and then heading inland toward Wanaka and Lake Hawea. Reading up on this route before leaving, I found many discussions online that disparaged the scenery compared to the Tekapo/Lindis Pass route. I felt kind of downhearted that we apparently would miss out on all the good views.

I shouldn't have worried. I'm not sure NZ has any non-scenic routes.

Because you might get stuck behind an entire house being trucked along the road.

Creeping along behind this house added an extra hour to our drive between Oamaru and Lake Hawea. It was actually kind of fascinating to watch the truck driver negotiate the windy road. (The truckbed had hydraulic stabilizers to keep the house flat as the truck inched around banked curves.) But man, I was glad we'd allowed plenty of time for the drive.

Besides, you need time to enjoy all that scenery.

Anyway, there you have it! The first ten lessons we've learned, out of what will doubtless be many more. Next I might do a post on some of the differences between NZ and CO skiing...but I'll get in a few more days on the slopes first. Gotta make sure I know what I'm talking about, right?