I started a “2020 in review” post right as January began, but then came the assault on the US Capitol on January 6th, and I just…stalled out. Whenever I think of the situation in the US, I’m swamped by such a mix of anger and sorrow that finding words feels nearly impossible. I mean, thank God that Biden won the election and tomorrow will take over the Presidency. But so many Americans still believe Trump’s lies, even without a shred of actual evidence behind them, even when the lies lead to violence and insurrection and deaths. “You can’t reason someone out of a position they didn’t reason themselves into,” as the saying goes. But then how do you fix the problem?

It's hard to see how the country can survive this, in the long term. “This” meaning a divide not just between political views, but on the very nature of truth and reality. Trump is not the cause, he is only the symptom. When he is gone, the siren song of tribalism and delusion that blinded his followers will remain. How do you reach people so caught in delusion they refuse to acknowledge evidence and facts? Who believe absolutely in a leader despite his constant contradictions of his own words? Who are willing to reverse positions on a dime without a hint of cognitive dissonance?

I don’t know. I try to focus on the good: not every Republican was willing to follow Trump off the cliff. Some few officials, like Aaron Van Langevelde in Michigan, and Brad Raffensperger in Georgia, stood up to enormous pressure from their own party and President, and refused to falsify evidence and support lies. Even Mike Pence, silent through so many of Trump’s abuses of office, finally hit a line he wouldn’t cross.

I wish I could feel more relieved. But if all that stands between the US and a violent collapse into authoritarianism is the honor and character of a few Republicans…that’s terrifying. While some conservative writers are at least honest in their appraisal of the damage, I haven’t seen any sign that the Republican party as a whole intends to do anything but keep plowing down the same ruinous path.

So yeah, I find hope hard to come by. Especially with the looming specter of ever harder times ahead, as the world struggles to deal with ever more costly impacts of pandemic and climate change. I believe Biden has good intentions, but he ran on a promise of trying to restore the way things were before. America as it was before is exactly what gave us Trump in the first place. I fear Biden won’t have the courage or political support to enact the sweeping reforms needed to stop corruption, combat the erosion of truth and spread of conspiracy theories and racism, and dismantle the outsize influence of lobbyists and corporate money on US politics. And that will be bad for all the world, not just the US.

Maybe my inability to see a path forward is a failure of my imagination. I remain enough of an optimist to hope that is true. New Zealand's election did give me some hope that not every country is doomed to follow America's ever-more-partisan path. Here, when the more conservative National party began to dabble in Trumpian disinformation and "blood sport" politics, they were soundly rejected by voters. For now, anyway. New Zealand is not immune to the problem of social media amplifying untruths and conspiracy theories.

But anyway. My doom and gloom could be the result of exhaustion...2020 was a strange and difficult year, even here where good leadership spared us most of the ravages of COVID.

I looked back at last January's post about my goals for 2020 and didn't know whether to laugh or cry. I didn't finish my drafts. I didn't compete in figure skating. I didn't complete my book recommendation algorithm.

Instead, I was there for my son when he needed me. First to help with his remote learning and keep him sane during the claustrophobic weeks of NZ's strict lockdown in March and April, and then later during the much longer and painful recovery from his trampolining accident.

I couldn't be happier to report that he's pretty much back to normal now. He’s water skiing and climbing and having a blast.

The final surgery to remove the titanium from his right arm still looms at some as-yet-unspecified time in the next few months, but in the meantime he's able to run and play and enjoy his summer school holidays, and that's been wonderful to see.

I did achieve one of my old goals: I started engineering consulting work, taking on a project related to the analysis of climate change, looking at high-resolution calculation of ice volume change in Greenland glaciers using synthetic aperture radar (SAR) data. That was just the kind of work I'd been hoping to find, so definitely a high point for the year.

Thanks to New Zealand's success at eliminating and controlling COVID, we were still able to get out and explore some beautiful new-to-us areas of the country. Nature is such a balm for the soul, and boy does New Zealand have a lot of balm to offer.

Last but not least, in early December, I fulfilled a long-held dream of my son's: we got a family dog. My son has wanted a puppy for years, but the timing never seemed quite right, until now. A backhanded gift of the pandemic: we knew we wouldn't be traveling overseas to see family anytime soon, so during my son's summer holiday in Dec/Jan, we'd finally have the time to devote to raising and training a puppy. If you haven't already seen the new addition to our family on my twitter and Facebook feeds, meet Comet:

Comet is adorable and loving and cuddly...and also exhausting and time-consuming and a hell of a lot of work, as all puppies are. It really is like having a baby again. A highly mobile baby with crocodile teeth and the urgent desire to eat everything that could kill him. (We have already had several emergency vet visits due to him snarfling up unfortunate objects hidden in the grass before we could stop him.) I won't lie, there have been sleepless nights and occasional tears and a lot of stressing over naps and crate training. But my son’s joyful laughter when he plays with Comet makes all the work worthwhile, and I’m certainly partial to puppy snuggles. (Comet loves to cuddle in my lap when he’s finally tired enough to sit still. Hooray for cuddly puppies!)

So what about 2021? I am too sleep deprived from puppy parenting to have any deep thoughts or high expectations. I would very much like to finish my drafts. That's the part of the past year that feels like an abject failure, even knowing all the reasons for it. The White Serpent (Cara novella) is at least close to done. The Dreaming Sea...isn't, but there's no point in stressing over how far there is to go. I'd rather do my best to enjoy the journey.

I was going to share some of the books and other entertainment that helped keep me sane throughout the past year, since I suspect we’ll all need sanity-savers for quite a while yet. But this post is long enough already, and the puppy will soon wake from his nap. I'll have to share those another day. In the meantime, I’ll close with the wish that all of you can find moments of peace and joy and comfort this year, in whatever ways speak to you best. 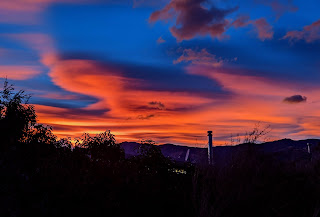 Posted by Courtney Schafer at 5:40 PM