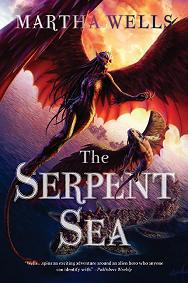 Ok, so I'm kind of cheating on this book rec: I haven't yet read The Serpent Sea.  It is sitting on my Kindle, waiting to be my reward when I finish writing The Tainted City.  But oh gosh, it's so hard to wait.  The Serpent Sea's predecessor, The Cloud Roads, was one of my favorite reads last year.  Great adventure, wonderful characters, and some really fascinating worldbuilding (Wells sets the novel in a secondary world populated by a myriad of nonhuman races, all with their own cultures, appearance, and customs).  In addition, Wells does some really neat things with gender roles, and manages to make the traditional theme of "loner finding his place in the world" feel fresh and exciting.  (Just goes to show how the power of a story lies in its execution!)  I've been salivating for The Serpent Sea ever since finishing The Cloud Roads last year - especially since I have full confidence The Serpent Sea will be an equally great read, after having loved all of Martha Wells's many previous novels.  (Besides, I've seen some very good reviews for The Serpent Sea, like this one, and this one.)

So if I'm looking forward to the book so much, why wait?  Well, I'm not one of those people who can read new books in little bits and bobs.  Once I start, that's it...I keep right on reading until I finish.  Since I read fast, that's only a couple hours.  But right now multiple-hour chunks of time are so precious and so desperately needed for writing that I simply can't afford to give one up, not even for a book I'm anticipating with such excitement.  But!  You are probably not in the same situation.  So, if you've read The Cloud Roads, hurry up and get The Serpent Sea.  If you haven't yet read The Cloud Roads, you're in for a treat: start there, and then jump right into the sequel.  If you've any taste for adventure fantasy with great worldbuilding, you won't regret it.
Posted by Courtney Schafer at 2:14 PM