State of the Schafer: Summer Adventures

I was going to write a proper "2021 in review" post, but I kept putting it off because I am so, SO close to finally completing the revised draft of The White Serpent. This is the Cara novella, except right now it's more like a short novel at 52,000 words, yikes. Maybe since Cara never got a POV in the Shattered Sigil trilogy, my subconscious wanted to be sure she got a solid chance to shine!

I haven't been neglecting brand new novel The Dreaming Sea, either; I'm chugging along at 500 words per day on that draft, even as I fix up the last few scenes of The White Serpent. Yet as time is flying and it's nearly the end of January, I figured I'd better stop waiting to catch up on the blog.

I have to say, the end of 2021 didn't go like I thought it would. When I last posted in October, the Delta variant of COVID had finally popped up in the South Island, and I was braced for it to spread.

Yet it didn't. Amazing what high vaccination rates can do! Many areas in NZ reached over 95% double-vaxxed for the 12+ population, and that seemed to stop Delta cold. Our local area hasn't seen a single case. (Our last recorded case of COVID was way back in April 2020.) Even in Auckland, the heart of the outbreak, cases never really took off. Numbers plateaued around 100 a day, and then slowly decreased to teens and even single-digits. People began to wonder if we'd accidentally eliminate COVID again, though everyone knew such a fortunate state wouldn't last, given the planned reopening of the borders.

Then came Omicron. After watching supply chains struggle and hospitals get swamped overseas, even in highly vaccinated areas like New South Wales in Australia, it seems certain that NZ has a rough few weeks in store. Yes, Omicron is milder than Delta, and vaccinated people have a very small risk of hospitalization and death. But when everyone gets sick at once, NZ is too small of a country to easily absorb huge disruptions to staffing and supply chains.

On a personal level, our family has done what we can to prepare. My husband and I both got our booster shots, our son is double-vaxxed, and we've got the food and supplies we need if we're all sick and needing to isolate, or if the supermarkets struggle. It helps to know NZ's government has a plan, and they'll continue acting on the best scientific advice.

Yet I'm sure I'm not the only one feeling a little nervous, as the wave begins to break. I am deeply grateful, however, that NZ held out as long it has. 2021 finished off for my son and husband and I with a glorious summer. We savored gorgeous days at the lake and on the trails; if the pandemic has taught us anything, it's never to take adventures for granted. Seize the day while you can.

So that's what we did. I finally climbed Corner Peak, monarch of Lake Hawea, whose majesty I had been eyeing ever since we moved here in 2017. I mean, just look at it:

The climb is hella steep, 1,683m in only 7.75km--that's 5,521ft in 4.8 miles, for any Americans. Locals had told me it's best to do the peak with someone who's climbed it before, as finding the right route is important, and even the right route has some "sketchy bits."

Given the Kiwi talent for understatement, I wasn't sure just what "sketchy" might mean. I had visions of peak routes I've seen in the Sierra that are deceptively labeled "third class" (meaning no rope or technical climbing gear is required), when in truth, as a gobsmacked friend once announced, "That isn't third class, that's DEATH CLASS."

So, I dutifully waited until I could join some experienced trampers on a trip up the mountain. Routefinding is indeed key, but turns out the sketchy bits are brief and not bad at all. Nowhere near death class, thank goodness. More the sort of thing where you mutter either a little prayer or a curse under your breath as you negotiate a tricky step. ("Please, please, no earthquakes right now.")

I'll have to do a proper trip report some day to show off all the awesome scenery from the climb, but for now, I'll just say the views from the summit were absolutely worth the effort.

The next adventure was a family trip on the Milford Track, on which we enjoyed a very rare blessing: clear skies and sunshine for the entire 4-day trek. Fiordland is known for mist and rain; I'd heard of people doing the Milford multiple times before ever getting a clear view of the stunning peaks surrounding Mackinnon Pass. I'm so glad we lucked into great weather, because just look at these: 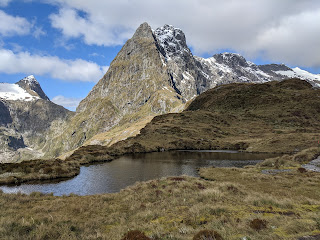 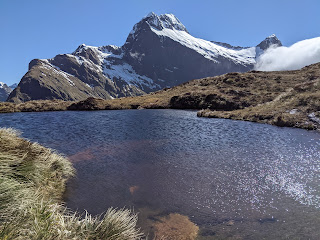 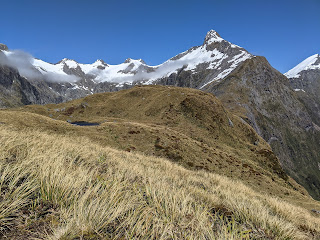 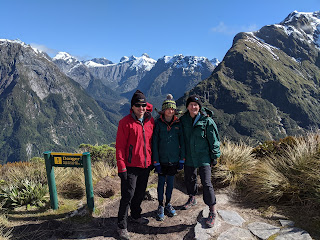 The waterfalls were also incredible, but again, I'd best save more pics for a proper trip report (lest this post grow to be even longer than The White Serpent!). Okay, but I have to show one sneak peak:

We didn't just stick to adventures in the mountains, though. NZ's beaches are also beautiful, so just before Christmas, we took a road trip up the South Island's wild West Coast, soaking in plenty of ocean scenery along the way.
The adventures continued in January, when we headed down to Riverton on NZ's southern coast, and I tried surfing for the first time. I had done plenty of boogie boarding and general playing in the waves in my younger years, but never real stand-up surfing. Oh goodness, it's so much fun. Hello, new hobby!
Granted, the closest beach is a 3 hour drive away from where we live, so I don't know if I'll ever get good enough to ride serious waves. That's okay, I'll have fun trying, whenever we next head to the coast. In the meantime, at least we can cool off from summer heat in Hawea's lake.
The pupster's accomplishment for the summer is that he's finally learned to chill out a lot more in between daily walks and playtime, which sure makes it easier for me to work and write! 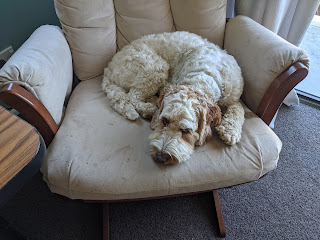 Don't worry, he still gets plenty of cuddles: 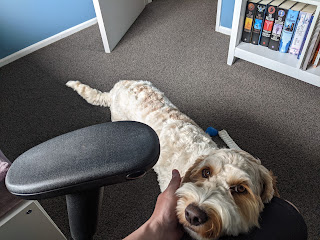 My son heads back to school next week, which always feels like summer's end, even if there's still another month of hot weather. 2022 looks to have plenty of challenges in store, but at least I can face them knowing I've had a good start. I'm lucky in that, I know. For everyone who's not starting the year off well, my heart goes out to you. My main goal for 2022 is to find ways I can help make the world a little better, whether on a personal or professional level. Maybe that sounds facile, especially in the face of the sheer scope and size of the problems looming over us all. Yet I cling to the belief that every act of kindness matters, especially in difficult times. I don't know if humanity can reach a brighter future, but I still want to strive for one.
Posted by Courtney Schafer at 4:41 PM