The return of the Thursday Adventure! Andrews Glacier/Flattop Mtn Loop

The best part about handing off The Labyrinth of Flame to the line editor is that I have time for mountain adventures again! Having finally recovered from my awful cold, I accompanied a coworker last weekend to Rocky Mountain National Park for a lovely loop hike with some snow climbing and plenty of spectacular scenery.

RMNP is a bit of a zoo in the summer. Arriving at 7:20am, the trailhead lots on Bear Lake road were already full, so we had to park at the visitor center and take a shuttle bus to the Glacier Gorge trailhead. We headed up the pretty and very popular Loch Vale trail:

But despite the crowds in the vale, once past the junction for the rough, steep trail to Andrews Glacier, we soon found ourselves in solitude. The views of Sharkstooth are terrific - I wished we had ropes and climbing gear to ascend the 5.6 route to the summit.

The trail climbs through talus toward the headwall below Andrews Tarn:

Andrews Tarn is a beautiful little blue-green lake, surrounded by wildflowers and backed by the Andrews Glacier - which is really more of a permanent snowfield, but I guess RMNP decided "glacier" sounds more impressive. The snowfield does develop dangerous crevasses in the late summer, and people have died descending when conditions are icy.

We came prepared with ice axes and microspikes, and the snow was in great condition: soft enough to kick steps in, but firm enough to prevent any postholing.

I'd been worried about my fitness level, or lack thereof, after months spent at the keyboard instead of on the trails. Thankfully, my genetic gift of altitude adaptation did not fail me. Most hikers slow waaaaay down once you get over 11,000-12,000 ft, whereas to me, that feels no different than sea level. I wasn't exactly blazing up the glacier, but I had no trouble keeping a steady pace.  Let's hear it for extra red blood cells! (And golden mega-stuff oreos. They help a lot, too.)

At the top of the glacier is Andrews Pass and the continental divide, which in this area of the park is an open expanse of tundra.

I love the tiny wildflowers that cover the tundra in summer. So delicate, so beautiful, and so hard to capture with an ordinary camera! But here's a shot of my favorite little blue flowers:

From Andrews Pass, it's possible to reach a whole host of mountain summits. If you start early enough, you can even do five peaks in a day. But since we could see clouds building, we headed straight for Flattop Mountain and our descent trail. On the way, we passed Tyndall Glacier, which is far steeper than Andrews: 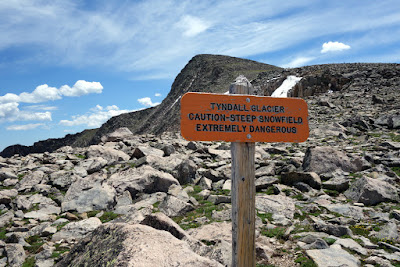 We met some friendly young marmots on the way: 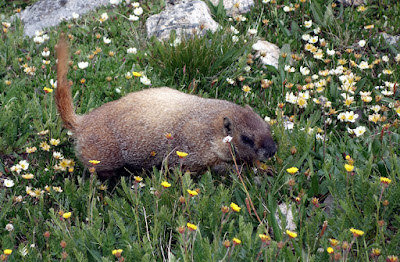 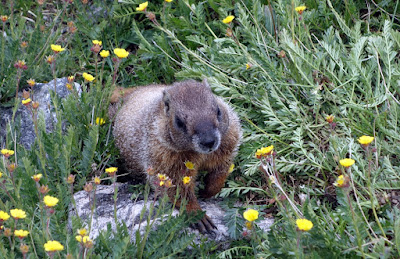 And enjoyed some impressive views of Longs Peak:

The clouds were growing ever darker, so we hurried down the Flattop Mountain trail, not wanting to get caught by a thunderstorm above timberline:

Thankfully, the thunder held off until we'd reached the trees. Along the way to Bear Lake, we had a nice view down into the gorge that holds Nymph Lake, Dream Lake, and Emerald Lake. (Dream Lake is where I filmed my Kickstarter video!)

My endurance and conditioning hold up well even after a long time without hiking, but my little feet do not. They were quite sore by the time we reached the Bear Lake parking lot and the shuttle back to our car. But every ounce of soreness was worth it (and they'll soon toughen up properly). A day in the mountains is like a drink of cool water to my soul. There's no better way to refresh creativity - and now Labyrinth of Flame is nearing publication, I look forward to many more mountains days to come!
Posted by Courtney Schafer at 4:13 AM