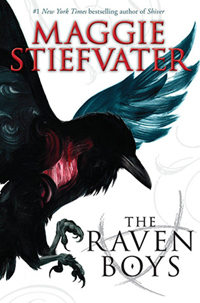 After I read Maggie Stiefvater's The Scorpio Races and found it to be one of my favorite YA books of the year, I was eager to try more of her work.  Yet I wasn't at all sure I'd find her other novels as compelling. All the cover copy seemed a mite heavy on romance, and I'm no romance fan.  (I've grown particularly weary of YA novels that spend pages and pages breathlessly describing every last tiny detail of a girl's infatuation with a Dangerous Boy, gaaaah).  Take the The Raven Boys' blurb, which talks about how Blue Sargent, a non-psychic in a family of clairvoyant women, has been told her entire life that her kiss will cause her true love to die - so she's decided never to kiss anyone, but then she meets Gansey, a rich student at the local private school, and she's drawn to him in a way she "can't explain", yada yada.  Doesn't sound like my type of book at all.

But based on the strength of The Scorpio Races, along with an assurance from a friend that The Raven Boys was equally as unique and interesting, I dove in.  I was thrilled to find that The Raven Boys is indeed atmospheric and compelling and perhaps even creepier in spots than The Scorpio Races.  It's also far, far less focused on romance than the blurb would have you believe (whew!).  The novel actually reminded me of some of Alan Garner's YA books, with the focus on Welsh mythology, obsession, and the slowly building sense of tragedy - not to mention the unflinching portrayal of the characters' flaws.  That last bit is better done with the male characters in the story, I will say.  All four of the "Raven Boys," Gansey, Adam, Ronan, and Noah, are fascinating characters, each struggling against their pasts in different ways, and perhaps the strongest moments in the novel deal with their fraught, complicated friendship.  The female protagonist, Blue, comes off a little bland in comparison.

As an aside, one thing that didn't bother me one whit about the female protagonists in Stiefvater's novels - Blue in The Raven Boys, and Puck in The Scorpio Races - is that they're both a bit on the loner side, and don't have the "strong female friendships" that are sometimes held up as a litmus test of good female characterization these days.  (Blue, unlike Puck, does live with a whole host of female relatives, but they're all adults while she's a teen, and the relationships are not the same as those between peers.)  The "female friendships" litmus test kinda bugs me, if I'm honest.  Not all women have close female friends.  As a teen, I certainly didn't.  Even as an adult, there have been plenty of times in my life where my close friends were all guys.  Granted, it may be more common for women to have a network of female friends; I know it's a blind spot in my own writing, that none of the primary female characters so far in the Shattered Sigil books are shown on the page as having close female friends.  (I'd always meant Cara to have just as many female friends as male ones, but I ended up cutting most of the scenes that showed her interacting with said friends, oops.)  But I just don't agree that it's unrealistic for a female character to be a loner, or have primarily male friends.

Back to The Raven Boys...I loved many, many things about it, and would recommend it to anyone looking for a YA fantasy that's both unique and full of complex characters, difficult friendships, and some intriguing magic (including a really interesting ghost).  One warning: it's the first in a series, the other books haven't yet been released, and my one area of dissatisfaction with the novel was the ending.  Not because it's a cliffhanger - it's not, really - but the very end felt like Stiefvater was trying too hard to provide a sense of closure, and skipping over some significant emotional consequences as a result.  But that's a minor quibble in the grand scheme of the story, and one that I may not feel as strongly when I see where she takes the characters next - something I'm quite looking forward to finding out.
Posted by Courtney Schafer at 1:53 PM