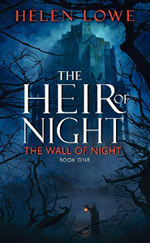 My interest in Helen Lowe's Wall of Night series was first piqued when the first novel, The Heir of Night, won this year's David Gemmell Morningstar Award for best debut fantasy.  Yet at the time, I was in nose-to-the-grindstone mode on The Tainted City, spending every spare second on writing and revising, with no pleasure reading allowed.  Heir of Night receded into the misty "Books To Read Someday" zone of my brain.  But then, not long after The Tainted City was completed, Helen and I both contributed guest posts to Abhinav Jain's "Names: A New Perspective" series.  After reading her thoughtful post on the power of names, The Heir of Night vaulted its way right up my TBR list - especially when I found the US Kindle version was only $4.74 (and still is: what a deal!).  I snapped a copy right up!  Then after Helen and I happened to chat on twitter and she offered to do a book exchange: two of mine for two of hers, I eagerly agreed to that offer as well.  I sent her The Whitefire Crossing and The Tainted City, and she sent me the 2nd novel in  Wall of Night series, The Gathering of the Lost, and her YA novel Thornspell.  Perfect timing, too...The Gathering of the Lost arrived right after I finished The Heir of Night and was eager to read more.  I just finished The Gathering of the Lost last night, and found it an even more engrossing read than the first. 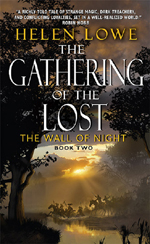 The series is classic epic fantasy: you've got a young protagonist prophesied to be the Chosen One, struggling to survive enemies and grow into a great and dangerous power, even as an evil force is rising to overwhelm the world.  But if you're a jaded fantasy reader, don't let the use of traditional tropes scare you off.  The power of a story lies in its execution; and Helen's stellar worldbuilding ensures her story feels both fresh and real, a creation wholly her own rather than anything derivative of older works.  One part of her worldbuilding I particularly liked was the sf-nal suggestion that both the psychically gifted Derai and their ancient opponents the Darkswarm come from another world - that in fact, their battle has been fought over multiple worlds, moving from one to the next as the planets are torn asunder in the struggle.  The idea of mixing interstellar travel and epic fantasy may not be new - I'd thought of Marion Zimmer Bradley's Darkover novels, particularly the ones set before the arrival of the Terrans, but Helen herself pointed out that C.J. Cherryh's Morgaine saga is an even better analogue, with the qhal and their gates - but the mixture certainly isn't common, and boy do I love the spin Helen has put on the idea.

Another area that Helen's series shines in is plotting - especially the "long game" style of plotting, in which disparate threads come together to give revelations that cast older scenes in a whole new light.  This was particularly evident in The Gathering of the Lost, which features some really interesting choices of character narration, and has some terrific reveals both of current events and character backstories.  Throughout the novel, the story steadily gains complexity and emotional depth, even as Helen shows off the breadth of her world and the different forms of its magic.  The characters are all appealing and interesting - no easy feat, with a large cast! - and the prose is lucid and transparent, allowing the reader to sink straight into the story and get swept away.

So if you've any fondness for epic fantasy, I highly recommend you give the Wall of Night series a try.  I had a wonderful time reading both Heir and Gathering, and can't wait for the next novel in the series...so write faster, Helen!  (In the meantime, I look forward to reading Thornspell!)

Posted by Courtney Schafer at 10:40 AM

Email ThisBlogThis!Share to TwitterShare to FacebookShare to Pinterest
Labels: Book Rec, Helen Lowe, The Gathering of the Lost, The Heir of Night, The Wall of Night