A few thoughts on ARCs

Look what came in the mail yesterday!  Three ARCs of The Tainted City, all pretty and shiny: 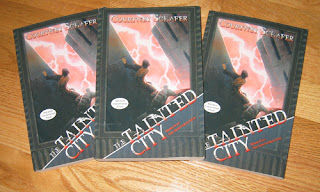 In case anyone reading this doesn't know what an ARC is, it's an "Advance Reader's Copy" - ﻿a not-quite-final version of the book meant as a promotional tool, sent to reviewers, librarians, newspapers, etc, and often bound using cheaper paper and cover stock.  (The last bit is definitely true here - I'm always startled by how thin Night Shade ARCs are compared to final copies, thanks to the use of inexpensive paper for ARC printing.) Night Shade only prints around 30 ARCs and sends them primarily to major review outlets that don't accept electronic copies.  I asked for three, and each one is already earmarked for a giveaway: one for the grand prize giveaway at Staffer's Book Review, one for my current Goodreads giveaway, and the final one I'll probably bring to WorldCon and raffle off at the Night Bazaar party.

Usually (and ideally), ARCs are printed after editorial revisions are complete but before copyedits, so that the only differences between ARC and final text are minor matters of typos and grammar.  That was true for The Whitefire Crossing.  In the case of The Tainted City, due to a time crunch the ARCs had to be printed before I'd finished my final revision pass - which means there are, er, rather more differences between the ARC and the final book.  To be exact, since I still remember all too well how many sticky-note comments I had to add into the laid-out PDF file of the book: 606 minor sentence-level changes, and a 7-page Word document's worth of paragraph-level replacements and insertions. (Pity my poor editor who had to enter all 600+ changes!)  So if you're lucky enough to win one of these ARCs in the giveaways above, you'll get to see a peek behind the curtain, as it were: what does one of my manuscripts look like before my last editorial pass?

Recently there's been a bit of discussion about ARCs, specifically about what reviewers should (or shouldn't) do with them after reading.  At Staffer's Book Review, Justin Landon talked about the case of someone who's been selling a multitude of ARCs for profit on ebay.  To me that seems...sleazy, for lack of a better word.  Yeah, it might be technically legal, but it feels like an abuse of the system.  Especially when it leads to piracy...it's pretty distressing as an author to see some pirated copy of your book pop up on the 'net long before release day.

(As for piracy after release day...my reaction is more on the "aggrieved, exasperated sigh" end of the scale than "frothing rage." Mostly because I think the sorts of people who pirate books are extremely unlikely to buy them even if somehow piracy was made impossible.  I do believe book piracy is stealing, and I boggle at how many people don't seem to get that.  But life's too short to waste mental energy on something that's so far beyond my control.)

But what about reviewers who donate their ARCs to libraries, or hand them over to used bookstores?  I've read posts from authors who wish their ARCs all spontaneously imploded come release day, because they hate the thought of imperfect copies of their book floating around the world (especially in cases where differences go beyond mere typos). As a perfectionist, boy howdy can I sympathize with that. I cringed just knowing my ARCs were going out to actual reviewers (who at least understand that an ARC isn't final, as opposed to J. Random Reader who might pick up a donated ARC in a library).  Yet I also flinch at the idea of pulping ARCs; it seems like such a waste.  And when I think about it, I'd rather that a reader stumbled over a flawed copy of my book than that they never saw a copy at all.

So for anyone who gets one of my ARCs, I say: do what you like with it (though I'd prefer you not sell it on ebay before release day!). Give it away, donate it to charity, burn it, let your toddler use it as a coloring book, even sell it if you like (though again, preferably after release day!)...it's yours to decide.  As for me, I've decided to go the giveaway route with other authors' printed ARCs (of which I have a few, mostly from places like World Fantasy where they're included in the free book bags).  If I like the ARC, I'll make sure to read the final copy (whether in e-version or in print); and whether or not I like the ARC, I'll hand it off to interested friends who might not discover the author otherwise.
Posted by Courtney Schafer at 8:01 AM

Email ThisBlogThis!Share to TwitterShare to FacebookShare to Pinterest
Labels: ARCs, The Tainted City