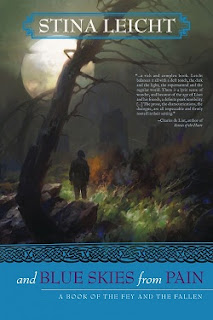 I guess this one's a "Tuesday Book Rec" instead of a "Monday Book Rec"...meant to write it yesterday, but was too busy getting ready for a business trip for ye olde day job.  (I am in fact writing this while sitting in an airport.  Used to be any chance I got I'd be frantically pecking away at my manuscript, snatching the opportunity to squeeze out a few more words...now I can mess around on the internet and write blog posts, wheee!) Anyway, this week's rec is for And Blue Skies From Pain, the sequel to Stina Leicht's excellent debut novel Of Blood And Honey.  Or really, it's a rec for both novels, because if you haven't read the first one, you really should.  Dark and gut-wrenching and beautifully written, both books are urban fantasy the way I like it: no sparkly vampires or sassy tattooed chicks stuck in love triangles; instead Leicht tackles the grim realities of life in 1970s Ireland, and does a spectacular job delving deep into the pyschological effects of trauma on her main character, Liam Kelly.  Liam is half-puca (shapeshifter); and his struggle to understand and accept his Sidhe heritage provides a nice counterpoint to all the divided loyalties and moral quandaries inherent in the real-world problems he faces.  And lest that all sound too thoughtful and literary, be assured the books include some stellar action scenes as well (Leicht's writing particularly shines in the car chases, thanks to her hands-on research into rally driving!).

While in the first book the supernatural element was more of an undercurrent throughout the novel, in And Blue Skies From Pain the three-way war between the Church, the Fallen, and the Sidhe plays a much larger role (as Liam and his priest friend Father Murray attempt to broker a fragile peace between the Sidhe and the Church).   But again, the real heart of the book lies in Liam's struggle to overcome the terrible events of his past.  I have to admit that in the first half of And Blue Skies From Pain, I spent a lot of the time wanting to smack Liam upside the head - but that is not a critcism of the book, because I think his self-destructive impulses and angry outbursts are dead on target for a realistic portrayal of someone who's endured as much abuse as he has.   Real pain isn't all pretty angst, and I appreciate a book that can give an unflinching look at it and show a realistic journey of character growth.   And even as I wanted to shake Liam, I kept right on reading, dying to know what would happen next.  Leicht brings the book to a nice conclusion, though with plenty of room for more books to follow in the series (something I hope will happen one day!).

So if you like your fantasy dark, realistic, and full of flawed yet fascinating characters, you owe it to yourself: read these books!
﻿
Posted by Courtney Schafer at 9:18 AM