Today at the Night Bazaar I talk about what hooks me into a book - an appropriate topic, since I've been reading a heck of a lot of good books lately.  How'd I find these books?  Mostly by word of mouth on blogger review sites, or continuation of series whose first book I liked, or even by meeting the author (in person or on twitter) and deciding to check their books out.

Sadly, while I read with a speed my friends consider inhuman, I write at the pace of a sedated snail...so there's no way I can write individual book rec posts for them all.  (Especially when I've got an idea itching at my brain for a short story set in the Shattered Sigil world!)  So instead of Monday book rec posts, I'm thinking I'll do "Reading Round-up" posts for the near future, in which I list books I've read recently that I've liked and give short descriptions of why. Even then, I've read too many good books in recent weeks to fit them all in one post, so today I'm gonna focus on awesome sequels: 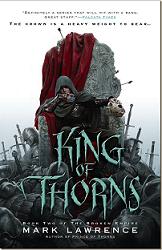 King of Thorns, by Mark Lawrence: sequel to his impressive debut Prince of Thorns (I reviewed that one on Goodreads here.) Just finished King of Thorns last night, and damn, it was good. It's got a more complex structure and is more introspective in nature than its predecessor, which only made me like it more.  Jorg remains a compelling character, and Lawrence sidesteps the challenge of secret-keeping in 1st person POV by quite the neat little authorial trick that worked beautifully in the context of the character and story.  But heck with that, y'all...the book has mountain climbing!  Turns out Jorg is quite the free soloist (and believably so). Plus there are volcanoes. And clever use of high alpine terrain in battle, and all sorts of things to please my little climber heart.  Also, there's a new female character who I liked very, very much (even while suspicious of her motives, which made her scenes all the more fun).  Win all around! 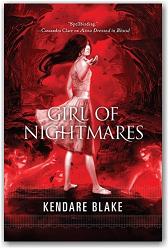 Girl of Nightmares, by Kendare Blake: sequel to last year's YA horror/dark fantasy Anna Dressed In Blood.  I thought Anna Dressed in Blood was pretty darn awesome - I adored the ghost-hunting protagonist, Cas - and the sequel did not disappoint.  Much like King of Thorns, it's a quieter, more gently paced novel than its predecessor, but that worked perfectly well for me, and the ending was lovely in its bittersweet closure. (Heh, but gently paced doesn't mean some scenes weren't intense.  One was so intense in fact it froze my Kindle.  Seriously.  There I was, reading along while Cas & friends face quite the nasty situation, and right in the middle of the scene, bam!  Kindle screen freezes & refuses to respond, or even turn off.  Thank goodness, a hasty internet search produced the solution: hold slider button on for a full 30 seconds to reset/reboot the device. And then don't get freaked out when at first all your books appear to be gone - they'll show up again in a few moments.)

The Coldest War, by Ian Tregillis: sequel to his 2010 debut Bitter Seeds, an alternate-history World War II novel featuring Nazi X-men vs. British magicians.  That would be cool enough, but Tregillis really hits it out of the park with the character of Gretel, a deliciously creepy precognitive who's manipulating pretty much everything and everyone for a goal that we don't discover until late in The Coldest War.  I'd recommend reading both books back to back - that way you can truly appreciate how beautifully Tregilis's plot comes together.  (Also, after you read the books, go check out the original cover art for The Coldest War, at Ian's blog. He's had kind of a wacky ride on the publishing rollercoaster, and the tale of the "cover art that never was" only goes to prove it!)

Posted by Courtney Schafer at 10:06 AM