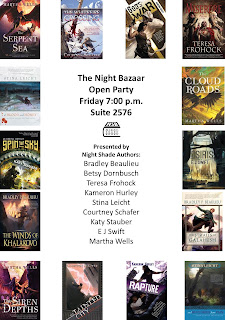 Three days until I leave for WorldCon in Chicago...and a mountainous pile of things to get done before then, both at day job and at home.  But since I don't want to entirely neglect my little blog this week, here are a few quick bits of news, a fun link, and a picture...

- The Audible narrator for The Whitefire Crossing and The Tainted City emailed me again: he's finished recording The Tainted City.  He said, and I quote (and yes, there were really that many question marks), "Now when do I get to start on book three????????"  Alas, I am not a fast writer!  But at least it shouldn't be long now before the first two books are available on Audible's site.

- Got a lovely review for The Whitefire Crossing from Anne Lyle (author of The Alchemist of Souls and the forthcoming The Merchant of Dreams) on her blog.  I'm especially delighted she liked the book since I thought Alchemist of Souls was such a great read.  Always a thrill to get a good review from someone whose writing you've enjoyed!

- Only a few days left to enter my giveaway for The Tainted City over at Goodreads - don't miss out.

- Today at the Night Bazaar, I share my thoughts on "science vs. magic". (Hint: I like both.)

- Coming to WorldCon?  Don't forget to visit the Night Bazaar party on Fri night (see the above flyer, designed by the ever-awesome Teresa Frohock).  And if you see me at a panel (here's my schedule) or walking the halls, don't hesitate to say hi!

- My favorite link of the day: Nathan Bransford explains the publishing process (so hilarious and so true.  I am currently in the phase represented by the unsuspecting guy walking down the hallway with a reviewer about to drop on his head.)

- Last but not least, I'll leave you with a picture of one of my favorite places: Mt Whitney, in the Sierra Nevada.  Pic is from a trip I did with my husband back in 1999: we climbed the Mountaineer's Route, spent the night on the summit (stargazing is spectacular at 14,395 feet!), and descended the regular trail.  The pic is of morning alpenglow on the needles of Whitney's south ridge, as seen from our camp at Iceberg Lake  - and yes, the rock and clouds really were that intense a gold in color.


Posted by Courtney Schafer at 7:41 AM

Email ThisBlogThis!Share to TwitterShare to FacebookShare to Pinterest
Labels: The Tainted City, The Whitefire Crossing, WorldCon