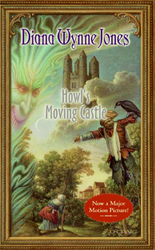 This week's rec is for one of my perennial favorites: Howl's Moving Castle, by Diana Wynne Jones.  HMC is one of those comfort books I read when I'm miserable and feverish and sick, because I find the story so charming it can't fail to lift my mood.  (And miserably sick certainly described me this last week, sigh.  I still have this horrible lingering cough that won't let me sleep, despite Robitussin, humidifier, and more.)

I would rhapsodize about Jones's ability to mix the ordinary and the extraordinary to produce a story that feels utterly grounded in the midst of wild flights of imagination, but I don't think I'm coherent enough.  Instead I'll say: how can you resist a book with a chapter entitled "In Which Sophie Expresses Her Feelings With Weedkiller"?  Not to mention this passage, which - going with the sick theme here - so perfectly encapsulates the sort of person who insists they're dying when they've got the common cold:

"Meanwhile a certain amount of moaning and groaning was coming from upstairs.  Sophie kept muttering to the dog and ignored it.  A loud, hollow coughing followed, dying away into more moaning.  Sophie ignored that too.  Crashing sneezes followed the coughing, each one rattling the window and all the doors.  Sophie found those harder to ignore, but she managed.  Pooot-pooooooot! went a blown nose, like a bassoon in a tunnel. The coughing started again, mingled with moans.  Sneezes mixed with the moans and the coughs, and the sounds rose to a crescendo in which Howl seemed to be managing to cough, groan, sneeze, blow his nose, and wail gently all at the same time."

If you haven't read Howl's Moving Castle: do.  Don't think that seeing the Miyazaki movie counts.  The movie was beautiful and entrancing as all Miyazaki movies are, but it's not at all the same story as the book.  And the book's story is genuinely wonderful.

Posted by Courtney Schafer at 1:32 PM