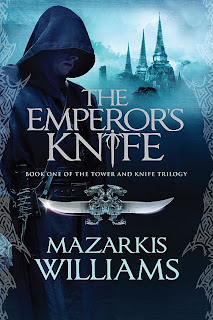 After reading several good reviews for Mazarkis Williams's The Emperor's Knife (e.g. at Staffer's Musings and Bibliotropic), not to mention the Halloween guest post Mazarkis did for us at the Night Bazaar, I was really looking forward to giving Emperor's Knife a try.  So much so, in fact, that I decided to use it as my reward for reaching the 100K mark on my draft of The Tainted City.


So last night, with 100K reached, and an evening's break needed before plunging into a 3-week writing marathon, I settled down with The Emperor's Knife and found it to be a very nice reward indeed.  Epic fantasy just the way I like it, with plenty of intrigue, characters in shades of gray, and interesting magic and cultures.  In classic epic fantasy fashion, the novel features multiple viewpoint characters:  an aging assassin, a vizier seeking glory for himself and his empire, a mad, imprisoned prince, and a windreader girl from the steppes who is meant to be the prince's bride.  Each of these felt fully developed as characters, with flaws, passions, and interesting parts to play in the overall story.  I particularly liked the fever-dream feel of some of Sarmin (the imprisoned prince)'s sections - the prose had me wholly convinced I was in the head of someone whose lifelong captivity had driven him more than half-mad.  I also appreciated that Mazarkis refrains from infodumping or spoonfeeding the reader, both for worldbuilding and for secondary character motivations.  (I much prefer novels that slowly reveal the world as the story progresses, and require me to engage my brain a bit.)  And of course, it's always nice to read something set outside the traditional quasi-western-european setting so common in fantasy - I loved the desert descriptions, which were spare but lovely in their economy.

If you like classic epic fantasy combined with more modern shades of gray, then by all means, run go read The Emperor's Knife.  For those leery of unfinished trilogies, I found that The Emperor's Knife came to a satisfying conclusion on its own, so you needn't fear some nail-biting cliffhanger.  But I'm very much looking forward to the second book in the trilogy, Knife-Sworn - I can't wait to see where Mazarkis goes with the world and characters.

Posted by Courtney Schafer at 11:40 AM