In the 2 days since my last post, NZ is up to 52 cases of COVID-19. Two of them aren't related to overseas travel: we now have the dreaded first sign of community spread. NZ's PM addressed the nation today to unveil a 4-level alert system; we're currently at level 2. This means schools stay open, but every adult who can work remotely should start doing so. We're asked to stop all non-essential domestic travel, and those people in high risk groups (elderly, immunocompromised, underlying conditions), should limit contacts by staying at home.

As I watched the PM's announcement, my son was downstairs playing with a friend. Another little friend is supposed to come over tomorrow, and I already agonize: should I cancel that? It's probably safest to do so. Yet so long as my son's school remains open, he's exposed to some risk anyway, and this may be one of his last chances to enjoy ordinary playtime. I don't think we have long before the alert level rises and we all go into true isolation, for who knows how long.

Looking at social media posts from friends all around the world, I can't help but recall the parts in Stephen King's masterwork of viral apocalypse The Stand where characters mourn the world that was. All the simple conveniences of life, but most of all the shared rituals of community, from baseball games and summer fireworks to crowded movie theaters. We're not anywhere near as bad off as survivors in The Stand, of course. Our favorite acts of community aren't forever gone for us, just gone for a while. We still have the internet to keep us together and build new rituals of connection despite physical isolation. But it's still a time to mourn, because when we come out of this crucible, the whole world will be different in ways we're not yet sure of.

PM Jacinda Ardern finished her speech to the nation by calling on people to "be strong; be kind." Oh, how I hope we can live up to that. (For my part, I'm registering with the local volunteer network which will organize help for local community members.)

In the meantime, if you're stuck at home and looking for a read that celebrates kindness and friendship in difficult times, I've got a rec for you: 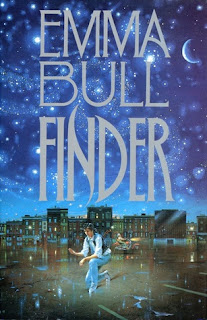 Emma Bull's Finder is old-school elfpunk urban fantasy, a murder mystery set in a town straddling the magical border between human and elven lands. The protagonist, Orient, is a human runaway with a psychic knack for finding things. His best friend is an elven woman named Tick Tick who's a talented mechanic. When Orient is forced into helping the local police solve a string of murders, Tick Tick and his other friends aren't going to let him face trouble alone. Bull's typical excellence with character work makes the story really shine. Fair warning, it does involve a deadly plague and contains a heartbreaking death scene, so if you don't want that reminder of reality in your reads right now, keep it for another time. Me, I plan to curl up with it tonight.

Posted by Courtney Schafer at 4:26 PM

Email ThisBlogThis!Share to TwitterShare to FacebookShare to Pinterest
Labels: Book Rec, Life in the time of Coronavirus, New Zealand, News