Another Shattered Sigil short story may be coming your way!

I know I've been dead silent here on the blog recently, but behind the scenes there's been a lot going on! Remember how I promised Shattered Sigil short stories through the Labyrinth of Flame Kickstarter? The stories have been turning into novellas, which is why it's taking me so long to write them. I'm currently putting the Cara novella (tentatively titled The White Serpent) through my critique group; once all the revision's done, it'll go out to Kickstarter backers. I'm still working on the Ruslan story, along with two other stories I promised to individual backers who got the Ultimate Fan Reward.

But now I have even more exciting news! I'll be writing yet another Shattered Sigil short story, this one for the Evil is a Matter of Perspective anthology that's being put together by Adrian Collins of Grimdark Magazine. It's being funded through Kickstarter, and the campaign will go live June 15. Here's the official announcement, and check out this awesome cover with art by Tommy Arnold: 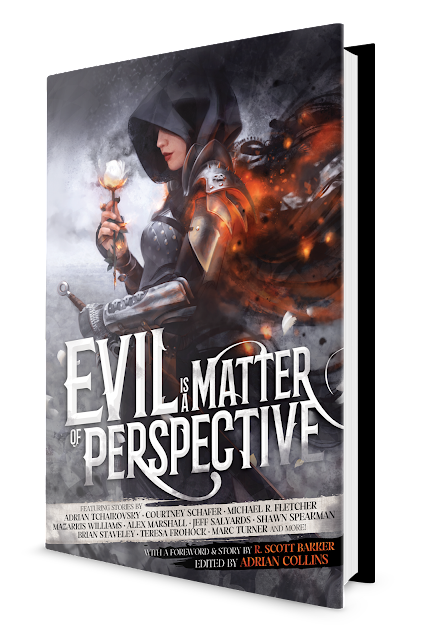 My story will be from Lizaveta's perspective, which will be a hell of a lot of fun to write, since in many ways she's more ruthless than her mage-brother Ruslan. Plus we didn't get to see as much of her as Ruslan in the series, so it'll be neat to explore her character a bit more.

I'm also really hoping the Kickstarter funds so I can read everyone else's stories, since I've read and enjoyed many of their series! I'll put up a reminder here when the Kickstarter goes live (or a few days after, anyway, since we're about to head out to Australia and I'll be on a tallship in the Whitsunday Islands on the actual launch date.)
Posted by Courtney Schafer at 3:27 AM